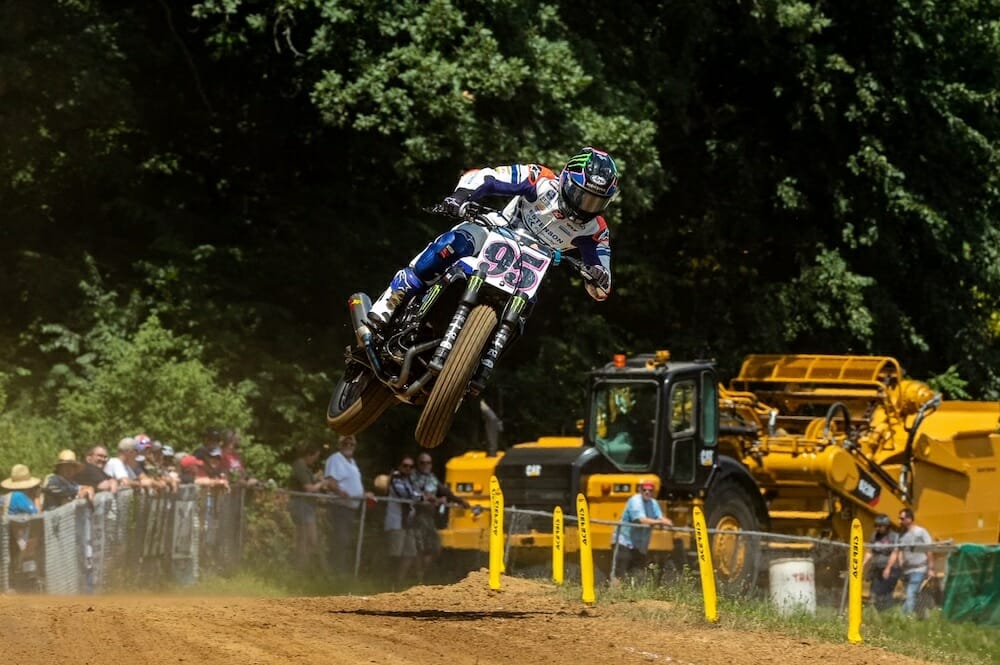 While Beach eventually went wire-to-wire to victory, the contest was actually quite a tense affair with two-time Mission SuperTwins entered by S&S Cycle champion Briar Bauman (#3 Indian Motorcycle/Progressive Insurance FTR750) glued to the wheel back of beach just about everywhere.

Bauman was the first to pass ‘VDK’, taking the lead out of the race-opening corner, while Mees and Daniels would do the same over the next few minutes.

Bauman only really showed Beach his front wheel once. That said, he was perfectly positioned at almost every moment to capitalize on any mistakes that could possibly befall Beach on the dry, notched track. However, the Yamaha ace proved remarkably resilient under fire, especially as he was still riding less than 100% after sustaining an ankle injury at Mission Port Royal Half-Mile a few years ago. weeks.

Beach took the checkered flag 0.492 seconds ahead of Bauman to improve his overall TT Series record to five wins in his last six attempts.

He said: “When I injured my ankle in the last race, I couldn’t even walk off the track. Coming to Peoria, there are so many fast guys here, and I sat on my butt for two weeks. I just have to thank my family, who made sure I didn’t do anything because I’m not good at sitting still.

“The whole Estenson team has worked so hard. Today was a bit hectic, but to get that win again here and get two in a row… To imagine Henry (Wiles) getting 14 in a row here is just insane. It feels so good. I’m pumped.

Bauman’s continued mid-season push further tightened the title fight. So did Daniels’ third-place finish, a result that only came after a long battle with defending champion Mees for the job. If not for his continued woes leaving the starting line, the rookie might have had more of a say in the end result. Yet he had to settle for standing on the box in his first premier class race at his home track.

Bauman is only three points behind Mees (188-185), while Daniels is only 13 points away. Beach also has new life, closing within 30 points of Mees (159) after picking up his second win of the season.

The challenge from 14-time Peoria TT winner “King Henry” Wiles (#17 Willy Built/Lyndy Roofing Co. Kawasaki Ninja 650) never fully materialized. Wiles showed respectable speed throughout the day but fell back to ninth before climbing a belated climb to an eventual sixth, finishing behind Vanderkooi in the Main.

Before being a true Mission Production Twins featured by Vance & Hines, Jesse Janisch (#33 Vance & Hines Harley-Davidson XG750R) originally made a name for himself as a Peoria TT expert. In fact, that reputation actually earned him the opportunity last year to win his current race – a race that then launched him into the championship hunt.

Although he has clearly grown beyond the specialist tag, Janisch has once again proven himself to be one of the best at the legendary venue. He was in imperious form, winning the drag race to Turn 1 and quickly building a considerable gap before even completing a single lap.

Janisch’s other half-winner, Johnny Lewis (#10 Moto Anatomy X powered by Royal Enfield 650), was overtaken by Dan Bromley (#62 Vinson Construction/Viper Air Yamaha MT-07) in the first corner, then spent the next couple of minutes looking for a way to get back through. By the time Lewis reclaimed second place, Janisch already had more than two seconds in hand.

That advantage only stretched even when Lewis looked clear ahead of him. Janisch eventually racked up over 14 seconds of padding before blasting his way to the front straight with a margin of victory of 12.192 seconds.

The triumph was Janisch’s fourth professional victory on the circuit, the first three aboard a single-cylinder machine. Then he said, “That was awesome. I’m so much more comfortable with the bike and the team this year. Last year I came here and I was just trying to be quiet and be polite and ride the thing. This year we are obviously working well with the team and making changes, trying to teach myself better and learn the bike better. The guys at Vance & Hines are amazing.

The win also gave Janisch a bit more breathing room in the championship fight. That said, defending champion Cory Texter (#1 G&G Racing/Yamaha Racing Yamaha MT-07) did what he does so well, minimizing the damage on days he’s at a disadvantage in order to defend himself another day.

However, both KTM riders found themselves trailing Estenson Racing’s Trevor Brunner (#21 Estenson Racing Yamaha YZ450F) off the line. Whale struck first, moving up inside Brunner as they headed down the straight a minute and a half into the fight.

The Australian would then proceed to open a few seconds up front as Kopp desperately tried to force his way through himself. Instead, he fell victim to the charge from Morgen Mischler (#13 American Honda/Progressive Insurance CRF450R) and dropped to fourth as Whale continued to slip up front.

Mischler would eventually exploit a big bobble from Brunner to slip into second with about a minute to go and then close in on the leader quickly. What once seemed like a certain victory became considerably less so, but Whale responded to Mischler’s late push to hold on for a 0.831-second victory.

While Whale took last year’s win in Peoria, that was only due to a disqualification ahead of him. So technically it was his second in a row at the famous race, although it felt like a first for him.

He said: “It’s been seven long weeks since (injuring himself) the Red Mile. And finally come back with a win… I feel like it’s been years since I won a race. It was so much fun. I found a line that worked early on and stuck to it. It’s unreal to win in Peoria, and the crowd here is awesome. I am delighted.

Mischer’s second represented his first-ever TT podium and saw him cut Kopp’s title advantage for the first time in five races (although it remains two full races, 220-170). The podium was completed by Brunner, who ultimately kept Kopp behind him the full distance of the race, which meant the title leader would equal his worst result of the season in fourth.

Click here for all the latest racing news from Flat Track Racing.

Invest in the electrical part (2)