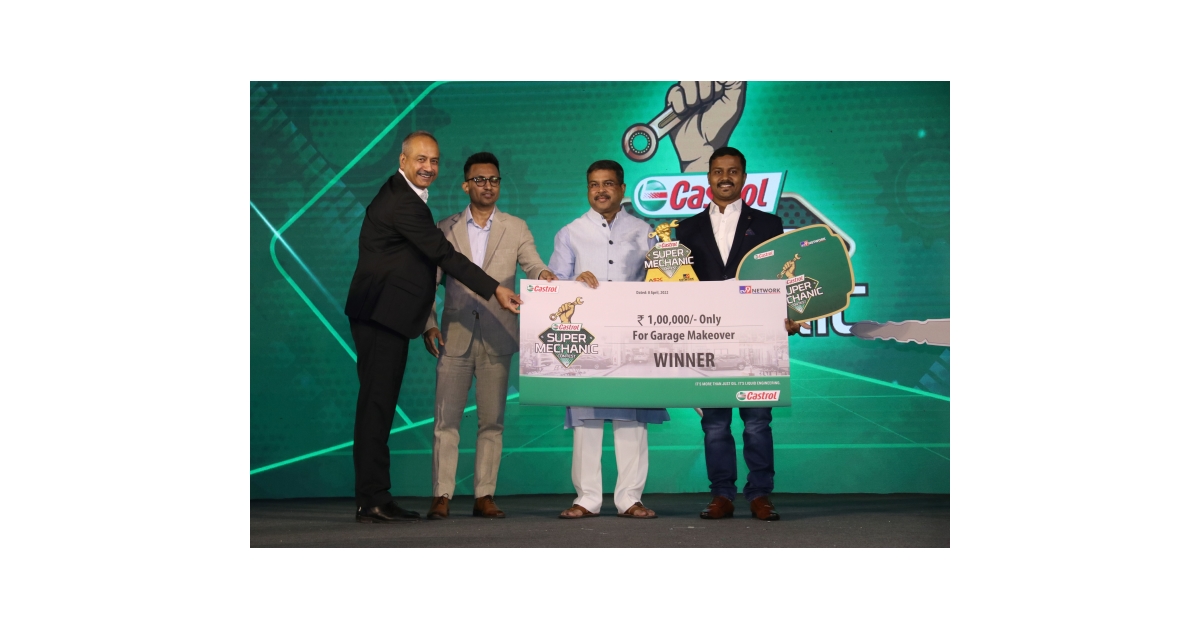 The fourth edition of the Castrol Super Mechanic competition was conducted using both physical and digital mediums to ensure maximum participation from mechanics across India. It saw a record attendance of over 140,000 mechanics, thanks to the contest’s Interactive Voice Response (IVR) round and a dedicated website. The competition featured a range of new digital tools and features, including a mobile game to allow participating mechanics to master various missions and challenges. Each candidate, in addition to testing their dexterity in their field, also acquired invaluable and relevant knowledge of the industry through the various stages. The top 50 entrants competed in a field final spread over three days from April 5-7, 2022.

Extending its commitment to honing and uplifting the mechanic community, Castrol India, in partnership with the Automotive Skills Development Council (ASDC), has created a purpose-built program covering new era vehicle diagnostics, digital tools for new generation vehicles and BS-VI technology. , etc. The masterclasses brought together more than 24,000 mechanics across the country.

Speaking of the contest, Sandeep Sangwan, Managing Director, Castrol India Limited mentioned, “At the heart of the Castrol Super Mechanics Competition is our goal to create the greater respect and pride that independent mechanics rightly deserve in their profession. We used this platform to inspire them to constantly improve their knowledge and skills based on changing industry standards. As the fourth edition of the competition draws to a close, we are extremely pleased to see the enthusiastic response to the competition, and the enthusiasm and encouragement it has provided for the mechanics. Castrol sends its heartfelt congratulations to this season’s winners and will continue to empower the mechanic community.”

Commenting on the occasion, Honorable Minister of Union, Dharmendra Pradhan, Minister of Education, Skills Development and Entrepreneurshipmentioned, “The mechanic community is an essential component of the Indian automotive sector. Harnessing their talents and honing their skills in a systematic and organized way can play a very important role in expanding their livelihood opportunities, enabling them to venture into changing times with confidence and skill. Programs like the Castrol Super Mechanic Contest go a long way in encouraging, developing and training mechanics, greatly expanding employment and entrepreneurial opportunities in the country.

As part of this season’s partnership with the TV9 network, Castrol Super Mechanic will air on the TV9 network and will be hosted by popular TV actor Ravi Dubey.

Commenting on the occasion, Barun Das, CEO of TV9 Network, said, “Castrol India Super Mechanic Contest is a ground-breaking initiative. True to its reputation as a world leader, Castrol has set new benchmarks. We are proud to be associated with this idea of ​​empowering communities. For us, each of the 1.4 lakh entrants is a winner. TV9 Network congratulates the winners of this season’s Castrol Super Mechanic competition.”

Coming out triumphant with their skills, knowledge and passion for automobiles, Kalka Prasad and Kishor Kallapa Gatade were crowned champions of the Castrol Super Mechanic Contest 2021-22, in the car and bike categories respectively. The two winners received a bicycle, two-year insurance cover for a family of four and a check for Rs 100,000 or a garage renovation. Finalists – Maru Mayur Bhai and Pravesh Kumar Rawat, in both categories, received a bicycle and one year’s insurance coverage for a family of four.

Mechanic Kalka Prasad, winner of the Castrol Super Mechanic Contest 2021-22 in the car categorymentioned: “I am thrilled and at a loss for words! What Castrol India has done and continues to do for our community of mechanics is truly worth appreciating. This competition has helped us gain recognition across the country and brought new respect to our profession as a whole. The experience, exposure and skills I have gained through training and skills development are invaluable. Castrol Super Mechanic will help create long term sustainable development of mechanics across India and contribute to social upliftment. I look forward to using everything I learned for my future and hope to share my knowledge and expertise with other mechanics.


Castrol is one of the world’s leading lubricant brands and has a proud heritage of innovation and fueling the dreams of pioneers. Castrol India Limited is one of the leading lubricant companies in India with iconic brands such as Castrol CRB, Castrol GTX and powerful brands such as Castrol Activ, Castrol MAGNATEC and Castrol VECTON being the brand of choice for millions of consumers and of customers across the country. The company is also active in certain segments such as high performance lubricants and metalworking fluids used in a wide variety of industries such as automotive, mining, machinery and wind power.


Castrol India has an extensive manufacturing and distribution network in India with three blending plants and a distribution network of 330 distributors who reach consumers and customers through over 100,000 outlets. Additionally, Castrol sub-distributors reach additional retail outlets in rural markets while the company also directly serves over 3,000 key institutional accounts. Besides providing world-class products and services, Castrol India focuses on safety, compliance and quality. For more information, please visit: www.castrol.co.in

When is it a good idea to speak with a truck accident lawyer?