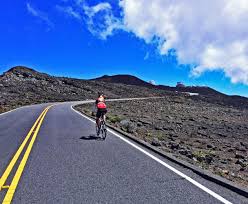 Maui County Council recently voted to settle a lawsuit that alleges the county was negligent in allowing an unguided and unauthorized Haleakalā bike tour that left a visitor paralyzed from the waist down.

Meanwhile, the council is working on proposed rules that would tighten regulations on the downhill bike industry, which has been riddled with complaints from residents for decades.

The 2020 lawsuit is the first of its kind against the county, company attorney Moana Lutey said Monday.

In the early morning hours of May 3, 2017, Harris, a visitor from California, and friends were picked up from their lodgings by Haleakalā Bike Co. and dropped off with bikes and unguided tour instructions at 6,500 feet above sea level at outside Haleakalā National Park, according to a recent board committee meeting.

Harris took the lead at one point on Crater Road and friends lost sight of her. Around the 6.5 mile marker, they found her lying on the shoulder of the road after apparently crashing into a guardrail.

There were no witnesses and Harris has no recollection of the collision, according to assistant company attorney Glen Pascual, who referred to the complaint at a recent committee meeting.

As a result of the incident, Harris suffered ‘severe injuries’ including broken vertebrae, spinal cord damage, a broken collarbone, broken ribs, traumatic brain injury and was paralyzed from the waist down. . Harris had more than $320,000 in medical bills and did not return to work, Pascual added.

The civil suit alleges county and state negligence in failing to ensure that the bicycle company was fit to operate an unguided bicycle tour business as part of the county’s licensing process; allowing bicycle tours to operate on Haleakalā despite a “lingering history” of bicycle-related injuries and deaths there; allow the cycling business to operate without a license as an unguided cycling business; and claims for compensation or contribution, which resulted in injuries and damages suffered by Harris in the 2017 incident.

At the time of the incident, Haleakalā Bike Co. only offered self-guided tours, which do not require permits under regulations under Maui County Code Chapter 5.22, Pascual said. Only guided tours require permits, which come with heavy insurance requirements.

If an agreement is reached, the county will include a language that it does not admit responsibility. At that point, the settlement amount could be disclosed, Lutey said. The state settled for $25,000, according to the committee meeting.

Government Relations, Ethics and Transparency Committee meetings over the past few months have discussed a bill that would strengthen county regulations for downhill bike tours.

Changes to Chapter 5.52 under consideration include establishing elevation restrictions and other rules to address public safety, traffic and legal issues. The discussion will resume in May after the budget sessions, according to committee chair Mike Molina.

“This bill explains why we need to take care of our bicycle ordinance for guided and unguided tours,” she said at a March 22 committee meeting.

Residents of Kula, Pāʻia, and Makawao have long worried about the danger of guided and unguided bicycle tours on narrow, winding roads, especially on Crater Road during peak traffic hours.

At best, arguments about whether bikes or vehicles should have the right of way are debated. At worst, serious injuries and even deaths are linked to inexperienced riders and unsafe or unlicensed businesses.

Last year, two cyclists collided on Makawao Avenue during a tour in April and a downhill cyclist lost control and fell on the handlebars of the bicycle on the Haleakalā highway in June, according to the Maui Police.

Fontana of Northern Burlington continues to launch a family business