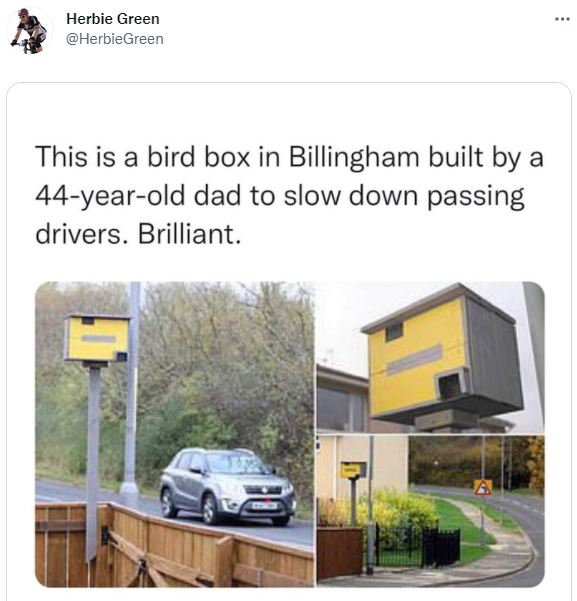 Faced with a laissez-faire attitude in the face of road danger, people are taking matters into their own hands.

Twitter user @HerbieGreen this week shared photos of a Billingham birdhouse disguised as a radar, but this kind of imaginative traffic-calming tinker isn’t just limited to these shores.

All over the world, people are demanding safer streets. Community groups in America have placed captive balloons filled with helium in the middle of the streets to calm traffic where children play; New Yorkers created their own concrete sidewalk extensions to slow traffic on turns, and parents encouraged their children to use wheelie bins to slow down drivers.

In Britain alone, road hazards kill and injure more than 16,000 children each year, and associated air pollution affects the health of millions more. Since there are cars, there have been protests against them. English philosopher CEM Joad captured the mood of the public at the turn of the 20th century when he described driving as “one of the most despicable soul-destroying and devitalizing activities that the misfortune of misguided mankind has ever had. imposed on his credulity ”.

Over the past century, groups large and small have been forced to take matters into their own hands to fight the dominance of automotive culture.

People Power: Dutch protesting against the danger of the road in the early 1970s

Perhaps the most famous, the Kindermoord stop movement sparked radical change in the Netherlands. As a result, the Dutch transport system is the envy of the world.

Now more than ever, more and more people understand that the needs of people must be placed above those of cars. For our part, we participated in a little traffic-calming DIY when we designed our own pop-up zebra crossing.

The effect of road hazards on the lives of children is insidious. Parents fear that the roads are too dangerous for their children to walk, cycle or play and drive them instead, increasing the very danger they fear. In contrast, a good quality infrastructure in the Netherlands allows Dutch children as young as 8 years old to cycle safely independently.

“We need to examine why we have created a society where it is not considered safe for children to play in their own streets because of motor vehicles, it is not considered safe to ride a bicycle – normal activity and nice – because of the risk of motor vehicles injuring people, so we need to change that focus and look at the source of the road hazard rather than saying ‘what did the victim do wrong“. Rachel Aldred, Professor of Transport at the University of Westminster and Director of the Active Travel Academy

The above excerpt is taken from our documentary Stop killing our children. The crowdfunded 40-minute film is narrated by the BBC’s John Simpson and features interviews with Chris Boardman, Dr Rachel Aldred, Dr Ian Walker, George Monbiot and the founders of the Kindermoord Stop movement. Please help turn the tide against the danger of the road. Please watch the feature below and share

ETA was established in 1990 as an ethical provider of green and reliable travel services. More than 30 years later, we continue to offer bicycle, breakdown and mobility scooter insurance while placing concern for the environment at the heart of our actions.

The Good Shopping Guide considers us to be the UK’s most ethical supplier.